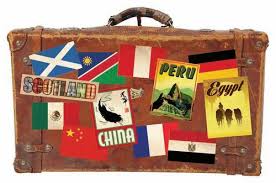 Like a golfer her sight she set on the green
and pipe dreams she began to spin
growing them like fragile mushrooms,
constructing sandy castles with empty rooms

Full of the familiar and stubbornly saturated,
of those mountains and monotony unabated,
a rightful longing of diversity brooded
boiling within her entrails undaunted.

Now uprooted far from the fertile
Like kraut unwanted from the pile.
The potent concoction of curiosity and anxiety
Set her in a trance-like perplexity

A perplexity that faded with dawning reality
in a place of pervading hostility.
A return not even remotely contemplated
For further apart the rift has now shifted

Where can this uprooted being anchor?
Why did she believe in tales void of candour?
The grail search enforced a redefinition of her essence
a quintessence of the loss of primordial existence.

She traces her steps back to a bolted door
and moving forward she is just a moor
Throwing its tentacles in all directions
In an attempt to halt the gyrations.

The mirror now a pile of broken glass
For her altering alien reflection an unbearable harass
A brutal coercive reminder of a double failure
a battering castigation for ignoring the cure.

Now an alien, she left her home again this time for Nowhere
She’s out of breath, she’s out for death, she’s out of time
There in that land she made her bed, lay in it but she was not there
She’ll die tonight, rise up Somewhere, there she’ll be fine

As the sun set that night
So did her heart set in fright.
The sadness in her soul was now a sickness
A disease so profound her life was in darkness

The song of her journey was rising again
The crescendo unfolds her redemption
She’s new again, different again, this time no pain
She’s still her queen, she’ll reign again, her heart her nation